He is best remembered for the Great Revival of 1857:

Rev. Jeremiah Lanphier (1809 ~ 1898) announced his new prayer meeting by passing out a simple 2-page flyer; A facsimile of the flyer is shown below, (as well as other illustrations) from the book titled; The Noon Prayer Meeting of the North Dutch Church, Fulton Street, New York;  By Talbot Chambers; 1858.

The Funeral of J. C. Lanphier:

“Service for the Founder of the Fulton Street Prayer Meetings.

The funeral services of Jeremiah C. Lanphier, (89) the founder of the Fulton Street prayer meetings, that were held yesterday afternoon at the Collegiate Reformed Dutch Church, were attended by several of his old friends who were associated with him in his labors.

After the singing of hymns Dr. Coe rose to pronounce the eulogy. He said that the greatness of Mr. Lamphier lay not so much in his great religious fervor as in the integrity and honesty that characterized him in his business life.

The clergyman told how In 1857 Mr. Lanphier was made a lay missionary in Fulton Street to visit the hotel, and boarding houses there, and of his great success in that direction. Then he spoke of the idea that suggested itself to him to start the prayer meetings, at first weekly. The first meeting was attended by six persons, and the movement steadily grew, and the meetings became daily.

After the benediction all in the church were invited to pass by the coffin.” Quoted from; The New York Times, published December 29, 1898:

LANPHIER–On Monday, December 26, 1898, at 130 East 16th St., Jeremiah C. Lanphier, in the 90th year of his age. Relatives and friends are invited to attend the funeral services at the Collegiate Reformed Dutch Church, 2d Av. and 7th St., on Wednesday afternoon, Dec. 28, at 4 o’clock. Internment at convenience of the family.

“Jeremiah C. Lanphier died last Monday at his home 160 East Sixteenth St. Mr. Lanphier was born at Coxsackie, Greene county, N. Y., on September 3, 1809, and was the son of Samuel F. Lanphier, a farmer and currier, who moved from Connecticut to Coxsackie and for a while made his home there. The maiden name of his mother was Jane Ross. Her parents came from Holland. 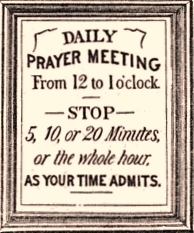 When he was about three years old, his father moved to Greenbush, N. Y., and a few years later to Bethlehem, N. Y., where the son was sent to school. At the age of sixteen Mr. Lanphier went to Albany to learn the tailor’s trade. After serving his apprenticeship he travelled considerably, working in various places. Later, he returned to Albany, where he studied music under the supervision of George Andrews who afterward engaged with him in the tailoring business in this city, in Broadway, near Fulton-St.

Mr. Lanphier came to New York from Albany about 1833. He worked for a time in the tailoring establishment, in Broadway, and then went into a wholesale clothing house. While he was employed in the latter place the firm failed and made an assignment to a clothing house in Maiden Lane, which was then the principal street for that trade.

Mr. Lanphier in his characteristic way gives an account of his entering into business on his own account. He had an interview with Samuel M. Blatchford, the proprietor of the clothing house to whom the assignment was made. He said:

Mr. Blatchford was an entire stranger to me, but I felt impressed to call on him to inquire about the establishment of which he held the assignment. Our interview was short, and in this wise: “This is Mr. Blatchford?” “Yes.” “You have the assignment of the establishment corner of Cortlandt and Greenwich Streets?” “I have.” “Well, I am familiar with the business, for I worked in that store for some time, and I called to see if I could make arrangement with you to continue the business.”

“We are strangers,” he said. “Yes” I replied, “but we can soon make ourselves known to each other.” “Are you a Christian?” “No. I attend church, however.” “Have you any capital?” he said. “Not much.” I replied. “Have you any reference?” “Yes, I can give you a good reference,” which I did. He said “Call to-morrow.” I went there the next day, in the afternoon, and he met me smilingly, with the keys of the store in his hand. “Young man, I am satisfied by your reference, and I am going to repose great confidence in you,” he said, at the same time handing me the keys.

“There is about $5,000 worth of stock in the store. Take an inventory and report to me,” which I did. I was enabled to satisfy him that his confidence was not misplaced.

He was living at that time near the old North Dutch Church, and in this way became acquainted with one of the members of the Consistory of the North Church, who told him that the Consistory had decided to employ a layman for missionary work, with the especial object of reaching guests of the nearby hotels. He offered the place to Mr. Lanphier, who a much deliberation accepted the office and wound up his business in June; and entered upon the work on July 1 the same year.

He was at that time a member of Dr. James W. Alexander’s church, on Duane St., the members of which later built the Fifth Avenue Presbyterian Church. He devoted himself entirely to this missionary work until old age compelled him to retire, and he was noted in this particular for the noonday services established as the Fulton-St. “prayer-meeting for business men.”

The singular story of God’s leading in the establishment and conduct of this wonderful agency for good is too well known to need repeating. Eternity alone will reveal the marvelous results of this Fulton St. prayer-meeting, which Mr. Lanphier began alone. The remarkable answers to prayer and the great number of these attest the divine inspiration of this meeting, while its history affords striking testimony to the faith, perseverance and indefatigable efforts of the worthy missionary, who for so long was the leader of this prayer movement.

Mr. Lanphier was a constant reader of The Observer, and a contributor to its pages, and as an earnest Christian worker, a lover of sound truth and a zealous preacher of the Gospel of the Lord Jesus Christ, both by speech and life, was ever a welcome visitor to The Observer office.”—The New York Observer; Dec. 29, 1898. ◊ Jeremiah Lanphier’s Retirement. Read more here.