And there sat in a window a certain young man named Eutychus, (happy; fortunate) being fallen into a deep sleep: and as Paul was long preaching, he sunk down with sleep, and fell down from the third loft, and was taken up dead. And Paul went down, and fell on him, and embracing him said, Trouble not yourselves; for his life is in him. Acts 20:9-10 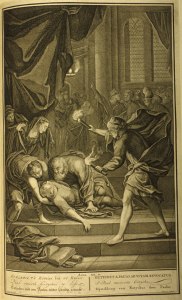 Commentary: “Sleeping when hearing the Word, is an evil thing” A sign of low esteem of the Word of God. We must do what we can to prevent being sleepy; not put ourselves to sleep, but get our hearts affected with the Word we hear, so as to drive sleep far away. Infirmity requires tenderness; but contempt requires severity. It interrupted the apostle’s preaching; but was made to confirm his preaching. Eutychus was brought to life again.

And as they knew not when they should have Paul’s company again, they made the best use of it they could, and reckoned a night’s sleep well lost for that purpose. How seldom are hours of repose broken for the purposes of devotion! But how often for mere amusement or sinful revelry! So hard is it for spiritual life to thrive in the heart of man! So naturally do carnal practices flourish there!”—Matthew Henry; 1662–1714 • Read more about Eutychus here.