Contrary to what’s being taught—here’s the truth of the matter:

“How to respond to the “Separation of Church and State” argument in less than a minute.”—David Barton.

“The 4th of July is a religious holiday.”—David Barton. 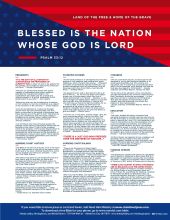 “The Constitution was not intended for a people that had no religion… it was to be for a people already Christian.”—Robert Baird, 1842.

“Our Government was founded by the most intelligent and pious men who came here not alone for civil liberty, but confessedly to advance religion and Christianity; and in the spirit and culture of the one, to secure to the world the blessings of the other.”—Lewis Larson.